“Like the wind blowin'.. In the palms of my mind..”Sounds That Can't Be Made 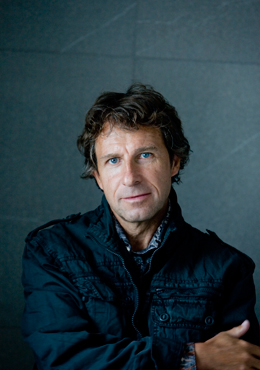 The Disturbance Fields are the physical manifestations that mother nature's fury can take against the human race due to our mistreatment of the oceans, rainforests and overdevelopment of urban landmasses. This has resulted in dramatic climatic changes in the temperatures of the earth and the sea and is the cause of far stronger and more violent storms and destructive natural events.

The Disturbance Fields features just one song... a 68 minute epic piece of music called “Washed Away” that takes you on a journey of a man fighting all of the forces of Mother Nature' wrath.

It is also personally based on the fact that during these recording sessions of all of Edison's Children's current and upcoming albums that we were hit by a hurricane, a 6.0 earthquake, a tornado and a massive blizzard which caused a state of emergency.

Having experienced first hand much of what Mother Nature's ferocity can deliver ... it was natural for the band to write a concept that maybe... we've crossed that line and perhaps Mother Nature has come to purge the world of what has become its biggest liability... human nature

The fourth Transatlantic album Kaleidoscope was released in January 2014. Pete then went on a world tour with Transatlantic taking in North America South America, a cruise with Prog Nation and also Europe.

Pete then went back on tour with Marillion to play South America for the second time in 2014 and also a second cruise which was with legendary band Yes on the Cruise To The Edge. Pete is currently working on the new Marillion album, as well as finding some time to work with Robin Boult on their side project and also putting the final touches to the New Edison's Children CD Somewhere Between Here and There.

2010/11. Since touring with Transatlantic on the Whirlwind tour. Pete has played two show's with Jem Godfrey, John Mitchell and Craig Blundell.

He has also released a 5 track CD with Robin Boult entitled Acoustic Industry and formed the band Edisons Children with co-writer and founder Eric Pastore.

2009 saw the release of Transatlantic's third studio album 'The Whirlwind' an epic 77 minute continuous piece of music recorded in Nashville immediately after the Marillion weekend in Montreal.

In March of 2009 Pete also performed an instrumental set at the Marillion weekend Holland with long time friend and collaborator Robin Boult.

In 2005 Pete teamed up with John Mitchell (Arena), John Beck (It Bites) and Chris Maitland (Porcupine Tree) for a new outside band called Kino. The debut album Picture was released in early 2005 with an album of demos, b-sides, and live tracks following in 2006.

During June and July 1999, Pete traveled to New York to meet up with Dream Theater drummer Mike Portnoy, Spock's Beard singer Neal Morse, and Flower Kings guitarist Roine Stolt to take part in a "progressive rock supergroup" project. The 2000 album SMPTe by Transatlantic was followed up with a double live CD, Live in America.

In early 2001 Pete returned to the States to record his parts for a second Transatlantic album. Bridge Across Forever was followed by a tour and it's live companion on both CD and DVD Live in Europe.

In 2000, Ian Mosley teamed up with Ben Castle to record Postmankind with Pete on Bass... not the first time Ian and Pete worked together outside Marillion! In 1996, with guitarist Sylvain Gouvernaire as the band Iris, they released the instrumental album Crossing the Desert. In addition, Pete added his playing to bandmate Steve Rothery's 1996 Wishing Tree Carnival of Souls album.

Pete has had a long history of very short-lived bands from his early years, including such gems as Orthi, The Robins, Tamberlane, Heartbeat, East Goes West, and the most successful of the lot, The Metros. The Metros' claim to fame was opening up for Duran Duran in New York in 1982.

Edison's Children
Somewhere Between Here & There

Edisons Children
A Million Miles Away..

Edisons Children
In the Last Waking...